“Democrats never agree on anything, that’s why they’re Democrats. If they agreed with each other, they’d be Republicans.”.” – Will Rogers

“A man who procrastinates in his choosing will inevitably have his choice made for him by circumstance.” –  Hunter S. Thompson

“The Euro ceases to exist the moment that France leaves.” –  Marie Le Pen

“France is back.” – Emmanuel Macron

Last week ended with two of the three major indexes hitting new highs.  The S&P 500 rose 14.80 to close at 2399.92 – a new all-time high, The NASDAQ Composite gained nearly 1%, closing at an all-time high of, advancing 6100.76.  The Dow Jones Industrial Average was the laggard.  The DJIA advanced 0.3% to close just above 21,000.  The small cap dominated Russell 2000 continued to underperform when compared to larger cap indices.

Financial talking heads are using the VIX to fan the fires of concern about an impending market sell off.    It seems every market pundit has a “fact” about the VIX or S&P 500 volatility which portends the risk of the end of the bull market.  As of the close this past Thursday, the S&P 500 had gone 7 days without a move of 0.2% in either direction.  According to Bespoke Investment, this was only the fifth time the SPX had ever gone as many days with so little movement.  This concern was followed by a 0,4% gain on Friday.  The VIX hit a post Financial Crisis low of 9.90 on Monday, while again dipping below 10 on Friday.

The weakness in the VIX and the lack of movement in the major indices are not predictors of market direction.  The greatest challenge for me as a trader is avoiding complacency.  Trading requires patience and a sense of urgency.  Trading has been described by long periods of boredom interrupted by moments of panic.  The lethargy of a quiet market can rob a trader of the sense of urgency required to prepare for the reaction required for moments of panic. Hunter S. Thompson summed it up with““A man who procrastinates in his choosing will inevitably have his choice made for him by circumstance.”

Here is an overview of the US market behavior last week and for 2017:

Here is an overview of last week for the VIX and related products: 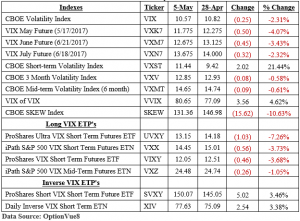 Advice to stimulate your imagination:

“The key to risk management is never putting yourself in a position where you cannot live to fight another day.” – Dick Fuld

“The easy way out usually leads back in.” – Peter Senge

“In a closed society where everybody’s guilty, the only crime is getting caught. In a world of thieves, the only final sin is stupidity.”- Hunter S. Thompson 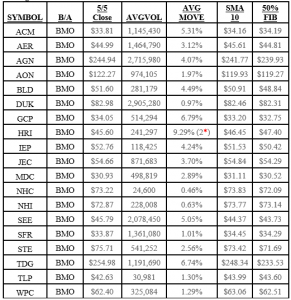 Other:  Boston Federal Reserve Bank President Eric Rosengren will be the Keynote Speaker at a joint meeting of the Lake Champlain Regional Chamber and Central Vermont Chamber of Commerce in South Burlington, VT – 12:00PM.

Other: New York Federal Reserve Bank President William Dudley speaks on the Benefits and Challenges from Globalization at the Interaction with President Dudley event held by the U.S. India Business Council, the Confederation of Indian Industry and the Bombay Stock Exchange in Mumbai, India, with audience Q&A – 8:30AM.