In remarks last fall to the Hayek Group of Reno, Nevada, San Francisco Federal Reserve Bank President John Williams said, “that an economy that runs too hot for too long can generate imbalances, potentially leading to excessive inflation, asset market bubbles, and ultimately… recession… [The economy is] at full employment, and inflation is well within sight of and on track to reach our target… it makes sense to get back to a pace of gradual rate increases.”

In an economy not distorted by government interventions, unemployed workers lower their reservations wages to land positions to feed their families and pay the rent. This results in wages being bid down. This is not a winning political scenario. Whether the pro-labor party is in power or not, it and its media allies have “persuaded” the pro-business party into supporting equity interventions like food assistance for the poor, government health insurance, unemployment insurance, housing subsidies, the minimum wage, and price controls on food and energy. Even though these interventions are intended to lesson inequalities that worsen during recession, they distort labor markets and have unintended consequences.

In the absence of the above interventions, wages would fall more quickly during recession than they do now. This would lower production costs, which would raise product supply relative to demand. When this happens, prices fall and production levels rise. As firms increase output, GDP rises up toward its full-employment level. As more laborers are hired, unemployment drifts back down to its natural rate. This process is known as recessionary self-correction. Because the interventions mentioned above inhibit wages from falling during recession, recessionary self-correction stalls out. The result is persistently high unemployment. To cure it, the Fed and its media allies prescribe monetary stimulus to fix the problem that well-intentioned equity interventions created.

When unemployment is low, GDP exceeds its full-employment level, and firms find it difficult to keep up with rising product demand. Firms add second and third shifts to support this. Tight labor markets pressure a firm to pay its workers overtime wages, or seduce workers away from its competitors with better benefits and higher pay. This can push costs up, which would reduce the supply of products. As prices rise and outputs fall, GDP declines to its potential level and the price level rises. This process is called inflationary self-correction. To head it off, the Fed and its media allies prescribe contractionary monetary policy.

Since the fiscal stimulus (tax cuts and higher government spending) that Congress passes during recessions is politically popular, and contractionary fiscal policy (temporary hikes in taxes and cuts in government spending) is never enacted when unemployment gets too low, the Federal Reserve (Fed) is expected to head off inflationary self-correction with contractionary monetary.

The Fed typically goes too far when it implements contractionary monetary policy. This is due impart to macroeconomic data being dated and imperfect. Its overreactions are evident when the federal funds rate in Figure 1 (the black line) is analyzed with Figure 2, which shows GDP (the red line), full-employment output (the black line), and the length of U.S. recessions (the widths of the grey bars) over time. When the Fed hiked the federal funds rate by 50% between February 1988 and March 1989, and by 41% between January 1999 and June 2000, mild recessions followed about a year later. However, when it hiked the rate by 430% from May 2004 to August 2006, the deepest recession since the Great Depression ensued a few months later. 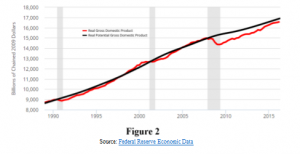 The latest period of prolonged low interest rates is unprecedented. Since 2008, the Fed has set the federal funds rate near zero. This has coincided with the Great Recession becoming a near decade-long recessionary gap (the situation where GDP is less than full-employment output). Not only does it appear that the Fed’s historic monetary stimulus has kept the economy in a stubborn recessionary gap, it has slowed full-employment growth. Prior to the Great Recession, GDP cycled around full-employment. Figure 2 shows full-employment output being pulled downward toward sluggishly growing GDP. This suggests that historic monetary stimulus has extinguished entrepreneurism that would have occurred otherwise.

To unemployed workers, bankrupt business owners, underwater homeowners who bought homes that were beyond their means, lenders who made too many bad mortgages, and brokers who sold housing shorts, the Fed’s historic monetary stimulus was a sellable cure during the Great Recession. It, however, has debilitating side effects. In addition to the Fed’s back and forth monetary policy causing the business cycle (or at best magnifying it), the printed money from its historic monetary stimulus purchased morale hazard from most Americans. Those who received government bailouts learned that one does not need to learn from failures and bad decisions.

Given that prices fall and quality rises in markets that are relatively free of government management, ownership, or subsidization, the Fed and its partners in crime in Congress should outsource their price fixing to the millions of consumers and entrepreneurs who populate our markets.