The way that macroeconomics is politically applied today produces a rift that separates it into demand-siders and supply-siders. Demand-siders advocate for temporary changes like tax cuts, higher government expenditures, and lower interest rates to stimulate aggregate demand when the economy is in a high-unemployment rut. The former pair of policies, however, produce budget deficits. To pay them off, demand-side economics proposes temporary changes in fiscal policy like higher tax rates or cuts in government expenditures. Although these policies pay down deficits, they are politically unpopular and have little chance of being enacted. Oddly, this is not the case with temporary interest rates hikes by the demand-siders at the Fed. In fact, most expect it since overstimulated aggregated demand needs to be pushed back down to head off the inflation that economic stimulus creates.

Supply-siders, like Robert Mundell and Art Laffer, focus on stimulating aggregate supply by setting marginal tax rates low and reducing government regulations. These policies reduce the costs of production and regulation compliance. The increase in the supply of goods and services that results lowers prices, which puts more money in the pockets of consumers. The increase in product supply also raises the demand for labor. More people working results in greater product demand. In total, as economic activity swells, tax receipts rise at lower tax rates.

The Laffer curve is the relationship between a tax rate and the revenue it generates. It is a core principle of supply-side economics. It got its name during a 1974 dinner attended by Jude Wanniski, Art Laffer, Donald Rumsfeld, and Dick Cheney. Although a 14th-century Muslim philosopher, Ibn Khaldun, discussed the relationship in The Muqaddimah, Wanniski dubbed it the Laffer curve after Laffer drew it on a napkin to show why President Ford’s tax increase would not raise tax revenue. (For the complete story, go to LafferCenter.com.)

The Laffer curve was the topic of discussion in Ferris’ economics class while he was ditching high school in the classic 1986 movie, Ferris Bueller’s Day Off. According to Ferris’ Economics Teacher, played brilliantly by Ben Stein, the Laffer curve explains why the Hawley-Smoot Tariff Act of 1930 did not work as intended: 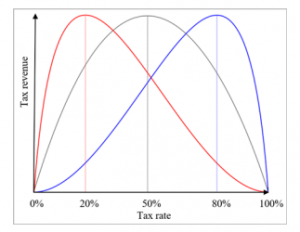 The Laffer curve also suggests there is a limit to the amount of money that government can seize from the public via taxation. Thus, elected officials interested in balancing the fiscal budget can only spend up to the tax revenue that the optimal tax rate generates. At any other tax rate, a budget deficit occurs.

For supply-side economics to work, low tax rates must be permanent. This is so because it creates certainty, which is important to firms as they adjust their long run plans. Instead of moving operations overseas, they expand domestically. This shifts long run and short run aggregate supply outward at a pace higher than what would have prevailed otherwise. Aggregate demand increases too after the lower tax rate boosts disposable incomes. In theory, supply-side economic policy results in no inflation over the long run and ever-expanding GDP. In practice, however, low tax rates are never permanent since Congress cannot bind future Congresses to the policies it enacts.

The graph on the left in the figure below supports the Laffer effect. After accounting for the effects of the 2001 and 2009 recessions, the trends in this graph show that people in the upper half of the income distribution generally paid an increasingly greater share of all income taxes collected as the top marginal tax rate was lowered to 39.1% in 2001, 38.6% in 2002, and 35% in 2003.

The graph above on the right shows the relationship between the growth rates in real GDP and federal tax receipts. The red line in this graph implies that each percentage point increase in economic growth increases the growth rate of tax receipts by 1.8 percentage points. This suggests that pro-growth policies push the Laffer curve upward. Thus, those who advocate for a large welfare state should perhaps become supply-siders or embrace their pro-growth policies.

Supply-side economics has its critics. Does it even exist if Congress cannot bind future Congresses to a low tax rate that it enacts? Austrian Economics regards it with the same esteem as it regards monetarism. Monetarists legitimized the Fed when they concluded that it was here to stay. Supply-siders legitimize expenditures on welfare and warfare programs and theft via income taxation when it supports the tax rate that maximizes tax receipts. When these pragmatists accepted a little government intervention, they left open the door to the creeping tyranny of the State that Murray Rothbard warns of in chapter 12 of his 1962 book, Man, Economy, and State.

The solution to the new normal, anemic economic and wage growth, that mainstream economics seems to be embracing is not more demand-side or supply-side tinkering. The solution is a restoration of the economic and personal liberty that we once cherished. In our heart of hearts, we know this to be true. The long run evidence is everywhere. Prices fall and quality rises in markets that are relatively free of government ownership, management, or subsidization. Prices rise, quality stagnates, or moral hazard is rampant in enterprises owned, regulated, managed, or subsidized by government.