Hal Snarr: The Road to Serfdom is Paved with Equity Interventions

Equity interventions promise to help the poor acquire goods and services that they currently cannot afford. Although a heartfelt case can be made for these interventions in the short run, the period where contracts fix wages and construction of buildings and roads is ongoing, F.A. Hayek’s The Road to Serfdom explains why they eventually trap our posterity in poverty.

In a free society, the government does not interfere in the voluntary transactions and contracts between consumers and producers, or between workers and employees. In this system of free enterprise, or free market capitalism, the forces of supply and demand efficiently allocate goods and services. 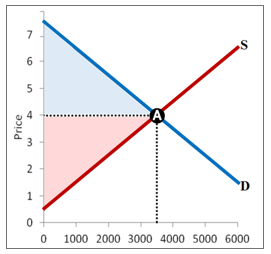 If the above diagram represents a labor market, the price is the hourly wage rate, the red line is the labor supply of workers, and the blue line is the labor demand of firms. In a free market system, social welfare, as measured by the sum of worker surplus (the pink area) and firm surplus (the blue area), is at its highest level at the competitive equilibrium.

The economists in the equity-efficiency debate use positive or normative arguments to make their cases. Normative economics says the government should intervene to help the poor, limit pollution, or provide consumers with more information. Positive economics opposes intervention because the accompanying consequences tend to harm those the policy was supposed to help. Normative statements are difficult to oppose because they tug on our heartstrings and are easily made in the few seconds one is given in today’s news media.

The ongoing political discussion regarding the minimum wage is a great example of an equity-efficiency debate. In the figure below, the minimum wage (the horizontal black line) succeeds in raising the hourly wage from $4 to $5. Workers who continue to work 40 hours a week have a higher standard of living. Their weekly pay rises from $160 to $200. Over a year, their pay rises from $8,000 to $10,000, assuming employees work 40 hours per week, 50 weeks a year. The minimum wage is an easy sell for normative economics. Anyone who opposes it comes off as being heartless.

The positivist economics argument against a minimum wage is much harder to make because much time is needed to demonstrate the many harms from the intervention’s unintended consequences. In the figure above, notice that the minimum wage reduces employment from 3500 at point A to 2500 at point E. It separates workers into 2500 winners and 1000 losers. The winners keep their jobs that now pay $5 per hour. The losers were making $8000 a year, lost their jobs and incomes, and continue to look for work.

The minimum wage reduces social welfare by the small green triangle in the above figure. It also benefits workers who kept their jobs at the expense of firms, as measured by the increase in worker surplus (the shaded pink area got larger) and the decrease in firm surplus (the blue triangle got smaller).

If production levels are maintained after the minimum wage is implemented, firms that rely on low-skilled labor may eliminate perks (e.g., free coffee, meals, tickets to various events and parking) or move some of their operations to overseas facilities. Some firms may decide to replace low-skilled labor with automation. Examples of this include the self-checkout lanes that have replaced cashiers or the robots that will eventually replace janitors and hamburger cooks. The workers who are displaced by automation remain jobless or must invest much time and money into acquiring valuable new job skills.

Suppose government compensates the 1000 displaced workers and the 1000 people who unsuccessfully entered the labor force with transfer payments equal to the income they would have earned had they been able to find or keep minimum wage jobs. In the above figure, the rectangle formed by the minimum wage line, the horizontal axis, and the two dashed lines implies that this program costs $10,000 per hour. This translates to $400,000 per week or $20,000,000 per year.

The above compensation program approximates reality well. In 35 states, the monetary value of receiving public assistance exceeds the pay from a minimum-wage job. This encourages the unemployed to stop looking for work. It may also discourage many of them from acquiring new job skills. Either way, the average length of joblessness is higher than it would have otherwise been. Unless public assistance payments are curtailed, the costs of these programs will accelerate over the long run as increasingly more people learn that work does not pay.

Public assistance is not free. The money paid out to program participants comes from somewhere. Government raises this money by imposing taxes on others.

In the diagram below, government levies a $2 tax on firms. This tax reduces product supply from the dark red line to the pink line. The vertical distance between these two lines is the $2 tax. The tax reduces output from 3500 at point A to 2500 at point B. It raises tax revenue by $5000, the area of the green rectangle. The tax punishes firms and consumers, as measured by the reductions in consumer surplus (the blue triangle) and firm surplus (the pink triangle). It also reduces social welfare by $1000, the area of the white triangle that points from the left toward point A. 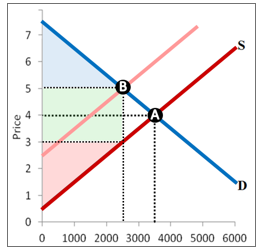 If the $2 tax is also levied on consumers, product demand shifts inward to the light blue line below. At point F, it intersects the supply curve that resulted from firms being taxed (the pink line). Although the tax on consumers increases the green tax revenue box’s height from $2 (in the above diagram) to $4 (in the below diagram), the width of this box falls to 1500. The smaller width results from the equilibrium quantity falling from 3500 at point A to just 1500 at point C. Together, the two taxes generate $6000 in tax revenue (the area of the green rectangle below) but lower social welfare by $4000 (the area of the white triangle that points toward point A). 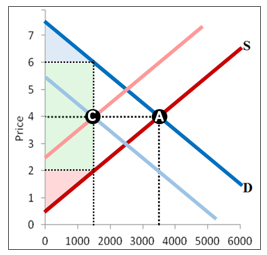 The minimum wage’s unintended consequences does much harm. This is why politicians, like former President Clinton, argue for modest incremental increases to it. Economists who support raising the minimum wage point out that past increases have not been associated with a higher unemployment. This argument, however, skirts the fact that these small incremental increases occurred during economic expansions. This suggests that the minimum wage is rarely set above market wages. This would delay the unemployment effect of a minimum wage increase years into the future. Since economic variables are recorded as the economy enters a recession at the higher minimum wage, it is difficult to determine what portion of the resulting rise in unemployment is attributable to a higher minimum wage.

Equity interventions distort markets, raise prices, and fail to accomplish policy makers’ goals. This is precisely why Eugen Böhm-Bawerk and other Austrian economists consider equity interventions to be an attack on freedom that ultimately puts our posterity on the road to serfdom.