Hal Snarr: The source of privilege: Evidence from Hypothetical City

Equity interventions are intended to help the poor acquire the goods and services that they currently cannot afford. Although a heartfelt case is easily made for these well-intentioned interventions, Eugen Böhm-Bawerk, F.A. Hayek and other Austrian economists consider them to be an attack on freedom and puts our posterity on the road to serfdom. I demonstrate this using a simple model of demand and supply. In this process, we discover the true source of white privilege.

In a free society, the government does not interfere in the voluntary transactions and contracts between consumers and producers, or between workers and employees. In this system of free enterprise, the forces of supply and demand efficiently allocate goods and services. The figure below illustrates how this occurs. 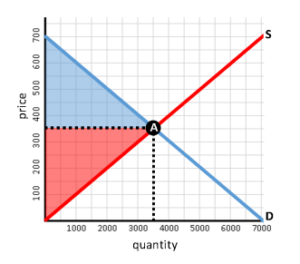 In the figure above, the price is determined by market forces, supply and demand. At point A, the blue consumer’s demand curve meets the red firm supply curve. If the product in this market is a laptop and each consumer buys one laptop in a given period of time, 3500 laptops are purchased by 3500 consumers, and each of them pays $350 for a laptop.

However, all consumers are not equal in terms of their willingness to pay. Suppose consumers are placed in a queue according to willingness to pay. The highest willingness to pay is at the left endpoint of demand and the lowest willingness pay is at the right endpoint. The above demand curve would then imply that the first consumer is willing to pay $700 (the left endpoint of demand) for a laptop, but the last is willing to pay $0 (the right endpoint of demand). Since all consumers pay the market price, $350, a benefit of $350 accrues to the first consumer, the difference in the price that is paid and what he or she is willing to pay. Since demand declines from left to right, the benefits of having to pay just $350 declines from the first consumer ($350) to the 3500th consumer ($0). Summing these benefits across laptop buyers is called consumer surplus. It is modeled by the semitransparent blue triangle in the above diagram.

Because a point on the supply curve can be interpreted as the minimum price firms are willing to accept for a given level of output, the difference this price and the market price represents a benefit that accrues to firms. For the first laptop sold, the figure indicates that the minimum price firms are willing to sell it at is about $0. Thus, the benefit that accrues to the firm that sells the first laptop at the market price is $350. Since supply increases from left to right, the benefit of selling each additional laptop declines from $350 for the first laptop to $0 for the last laptop. Summing these benefits across laptop sold is referred to as firm surplus, which is modeled by the semitransparent red triangle in the above diagram.

The sum of consumer and firm surpluses (or worker and employer surpluses) yields the measure of social welfare that economists call total surplus. It is maximized at the competitive equilibrium, point A. Since only the most efficient producers can produce products below market prices, economic efficiency is greatest when markets are competitive and government does not intervene. This means the collective economic well-being of people who participate in free and competitive markets cannot be improved by government interventions.

The question that separates economists is whether government should intervene or not. Economists battle each other in this equity-efficiency debate. Those who side with intervention use normative arguments like: Government should intervene in markets to legislate a wage that allows the working poor to deal with the skyrocketing cost of living. Such normative arguments are difficult to oppose politically because they tug on our heartstrings and can be easily made in the few seconds one is granted in a segment on the evening news. The minimum wage rate and rent control laws are great examples of such equity interventions.

If the above figure is used to describe Hypothetical City’s rental market and its low-skilled labor market, the market determined monthly apartment rent and the weekly wage rate are both equal to $350. Suppose the majority of Hypothetical City’s aldermen believe rents are too high and wages are too low. As a result, they enact a minimum wage rate of $500 per week and legislated rent of $200 per month. The horizontal black line in the left graph below is the city’s minimum wage while the same in the right graph is the city’s maximum rent.

The two polices are intended to boost the standard of living of Hypothetical City’s residents. For the residents who continue to work 40 hours per week, 50 weeks a year, the minimum wage raises their pay by $150 per week, or $7,500 per year. If rent control does not alter their housing status, rents would decline by $150 per month, or $1800 per year. The net annual benefit that accrues to said workers is $9300. This simple analysis illustrates why normative arguments supporting equity interventions are so difficult to oppose.

Positivist arguments against equity interventions are a much harder sell since much more time is needed to demonstrate their consequences. In the left figure above, the minimum wage reduces employment from 3500 (point A) to 2000 (point E) and increases the number of people wanting to work from 3500 (point A) to 5000 (point L). The result is 3000 unemployed workers, which corresponds to a 60% unemployment in Hypothetical City. Meanwhile, in the right figure above, rent control reduces the number of people living in homes to just 2000 (point H) and increases Hypothetical City’s population to 5000 (point N). The 3000 people who are now looking for housing must either room with the 2000 who were lucky enough to keep their apartments or live on the streets. If the apartments are just big enough for one person, rent control would result in a homeless population of 3000, which is 60% of Hypothetical City’s larger population.

With regard to product demand, suppose willingness to pay for products and housing is positively correlated to income. Under this assumption, the blue demand curve in the right figure above represents a queue with the richest resident of Hypothetical City being at the left endpoint and the poorest being at the right endpoint. The richest person would be willing to pay $700 per month for an apartment but would only have to pay $200. If Hypothetical City does not have the resources to police bribery or black market activity, the richest person is willing to pay a bribe as high as $500. Bribes decline along housing demand to $300, the bribe the 2000th richest person is willing to pay. However, since the rent was $350 prior to rent control, bribes would be much lower. If apartments are of unequal quality, the richest resident would get the nicest apartment with biggest bribe and the 2000th richest resident would get the last apartment with 2000th largest bribe.

Prior to rent control, all 3500 of Hypothetical City’s original residents had homes. However, rent control displaced the city’s middle class, the 2001st to 3500th richest residents. All ended up living on the street with the 1500 people who were induced to moving to the city with its artificially low rents.

Suppose that Hypothetical City also set a maximum price on laptops to make them more affordable to the poor. For simplicity, suppose the demand and supply curves above also model the annual demand and supply of laptops. If the city imposed a price ceiling of $200 on each laptop, the right graph in the figure above implies that only the richest 2000 residents are able to replace their aging laptops. This is so because they are willing to pay higher prices in emerging black markets. If the price ceiling had not been imposed, all of the city’s original residents could continue to replace older laptops every year. The price ceiling means the members of the city’s former middle class are stuck with aging laptops.

Thus the policies that are intended to help the poor—rent control, price ceilings and the minimum rate—harms the poor, destroys the middle class, and widen wealth and income gaps. Since these policies had little effect on the residents who were raised in the wealthiest households, equity interventions, at least in Hypothetical City, are grants the their privilege.