Good morning. Another solid week for the market last week, as the market, in the last four days, was able to sustain the levels reached on last Monday’s strong rally. Despite a down Friday, the S&P closed at $81.61, up 4.90 or 6.4% on the week. The very quick, maybe bear market, rally from the lows of 3/6/09 stands at over 21%. According to S&P analyst Howard Silverblatt, the rally of over 20% in two weeks is the most in percentage terms since 1938, and this morning Morgan Stanley is advising investors to sell stocks as they feel the market recovery has moved ahead of the actual signs of a turn around in the economy. This morning pre-opening the S&P Futures are down almost 20 points, foretelling a pretty solid sell-off today. Time will tell. 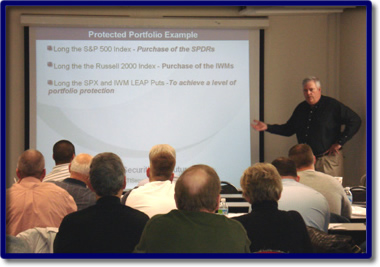 There was another solid turnout at last Saturday’s PTI seminar. We continue to attract terrific people looking to learn and contribute. It is surely apparent, however, that not a lot of people are confident in the direction of the market, or individual companies, or government, or whatever. I think people, even those trying to keep up with what is going on, are really unsure of where things are heading. I surely am right with them regarding not possessing a crystal ball, but we talked a lot about the different things that might happen, and how it is possible to intelligently plan for the different outcomes. Again, great group and thank you for those that attended.

This morning we have news that the governmental advisory task force is recommending the replacement of GM Chief Rick Wagoner, and is advising Chrysler to complete their merger with Fiat. Maybe when this suddenly all-knowing task force has a free moment they will set their sights on government and throw out the incompetents there (wishful thinking). Anyway, the charges against Wagoner are that he did not react quickly enough to the changes in customer demand due to rising gas prices, and that the management did also not anticipate changes in the economic outlook by cutting costs deeper and sooner. It should be noted that the rise in oil prices probably came about over a 6-9 month period, and the lead time for a new vehicle (complete with all the required government tests) has to be 2-3 years plus. I am also curious of how any cost cutting move could have made up for an economic collapse (caused the last time I heard by housing price declines and incredible leverage regarding mortgage and other loans) that dropped auto sales by close to 50% month over month. Again, if this committee has that answer, let them loose on the government.

Am I defending GM and Mr. Wagoner? Not really. The management of the auto industry and the performance of the Unions in protecting their members has been a source of great curiosity to me since University days. I am just stunned by how much every commentator and elected official (most of them have never balanced a business check book, let alone a government check book) has suddenly become an expert on making cars. What are some of the big issues? Everyone (of course) knows that the unions make way too much money, and in this competitive world American workers just need to understand that they have to work for almost nothing for their companies to compete on the world stage. It also follows that no one (other than management and government employees) should have solid health care benefits and decent pensions. How many people pushing this view (greedy labor is the problem) even know that the amount of direct labor hours in the average car is around 35, and that the unions have caved to the point where a lot of new workers make in the range of $15 per hour. These same workers made as much or more in the late 1970’s, when a nice car cost around $6,000 and the labor hours per car were probably a lot more than 35. Since the same car now costs four times that, it is hard to imagine how direct labor costs could be the problem.

What about benefits, and where did the Chief come up with this $15 per hour cost of direct labor, everyone knows it is around $75? Just because TV personalities and your (I guess “our”) elected officials would not know the difference between a direct cost and an indirect cost if it stung them, we should not be so misinformed. As the workers in the auto industry aged, they began to trade off in labor negotiations future benefits for actual increases in hourly wages. In plain English, instead of a raise of, say, $3 per hour the workers were willing to accept increased health benefits as they aged, or increased pension benefits. That cost should have been funded as it happened. The auto companies should have gone to a third party insurer, priced the benefit, and started making the proper contributions on day one. They did not, and the unions did not enforce that kind of discipline on them. The result was really that the companies did not have to give the $3 raise and did not fund the alternative, meaning their profits in the short term (and accompanying bonuses to management) increased. It should be noted that during the couple of decades in question the price of autos probably increased 3-4% per year, while the price of health care increased probably 10+%, something no one could have predicted. The point is that it is wrong to divide these underfunded indirect costs by the current (lower) number of labor hours and come out to some ludicrous labor rate of $75-90 per hour, as if anyone today is actually making that. As to why the unions bargained for these future benefits and never really enforced their funding is (to me) the million-dollar question. The money for the benefits from a worker in 1991 should be funded somewhere in its entirety and should not be a current issue. Now, however, the governmental solution seems to be a (quick and surgical?) bankruptcy, where they essentially walk into court and renege on all these legitimately bargained-for benefits to these workers. Never mind the excess bonuses paid to management because legitimate expenses were not accrued or funded, or excess taxes paid to government.

So what is the problem? Over the long run management has made a long string of bad decisions. It is difficult to manage a company whose sales relevance is declining, especially one with high fixed costs. Having said that, they lost sight of the customer, evidenced by (initially) not keeping up with competitors’ warranties, losing brand recognition (dumping the entire Oldsmobile division, including the incredible Cutlass brand), totally screwing up the initial positive Saturn experiment, etc. They grew up in an era when they had very little competition, and continued to manage that way. The amount of indirect labor (overhead) grew at an alarming rate, and as an added insult, they even messed up the incredible cash cow GMAC by entering the mortgage market. How a Board member could sit there, not fund basic obligations, and watch bad decision after worse, is amazing to me. What egos! How broken is the Board system in this country?

So what does this all mean for us? The market looks to be going to give back some (hopefully, not all) of last week’s gains. For those in the PIP having SPY’s or IWM’s our puts are right at the money and our short calls are slightly out of the money, meaning we are positioned just right for this week. If the market were to slide significantly down the extra cash most have available could come in handy. If I had to make a prediction I would say that we have had the fierce sell-off, have come back almost two-thirds, and now are in sort of an odd area where we will wallow around based on the news of the day. The news on GM and Chrysler is sure troubling, and the depth of the government involvement is not at all reassuring. That industry to a large extent defines a lot of middle America, and for most of a century was the consummate (other than Boeing) blue collar job that really defined the manufacturing middle class. On one hand it is hard to survive the blow the current economy has dealt the auto makers, on the other you ask “How can you be in business for 100 years and not have saved enough to weather a one year (we hope) calamity?” The really sad part is everyone is partially to blame, government, management, and unions, even customers who developed this elitism regarding foreign cars that now are marginally better, if at all.

We look to pick up some GM stock if it gets beaten up to excess, mindful of the bankruptcy risk, and also watch the GM bonds should they drop below the price bondholders are liable to settle for in a bankruptcy. Also watch Ford if it goes down too much. We remain a buyer of the XLF on any sell off below $8-8.50, and maybe the XLE under $40. Cautiously aggressive is the story for this week (is that like saying don’t pitch him anything good, but don’t walk him)?

We look to pick up some GM stock if it gets beaten up to excess, mindful of the bankruptcy risk, and also watch the GM bonds should they drop below the price bondholders are liable to settle for in a bankruptcy. Also watch Ford if it goes down too much. We remain a buyer of the XLF on any sell off below $8-8.50, and maybe the XLE under $40. Cautiously aggressive is the story for this week (is that like saying don’t pitch him anything good, but don’t walk him)?