The Ghost of Progress Past

Good morning. Very slow week for the market on a weekly basis, but complete with a significant down day on Monday and a large up day on Wednesday. The market continues to move somewhat violently within a range based on whatever news seems to be significant on a given day. On that same theme, the market continues to make news based significant moves, followed by literally hours of very slow and static trading. As a trader, you are either positioned right for the move of the day or not, with very little opportunity to recover. For the week, the SPY was down from 92.04 to 91.84, or .2%, after reaching a low of 88.85 (3.5%) on Tuesday. The VIX was actually down significantly, from 27.98 to 25.93 (7.3%). You would have to go back to September 12, 2008, to find a VIX close under 26. Another phenomenon affecting our trading is the developing positive skew in the monthly volatilities going out, meaning that the current market stagnation has market participants more comfortable selling near term premium that further out. Volatilities four to six points higher a year out than in the current month are not uncommon. 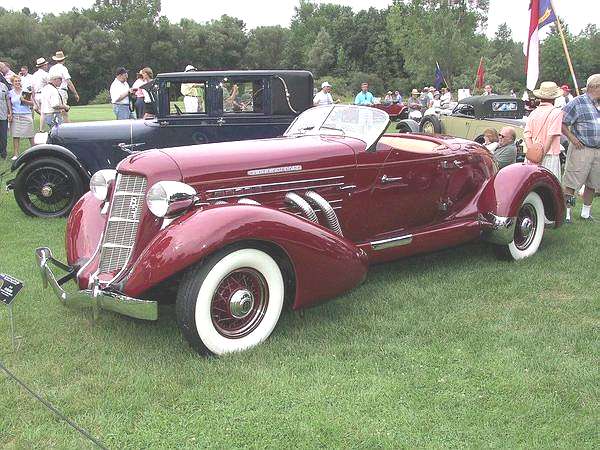 This weekend I took a drive to Ohio for a family reunion, and on the way we stopped in Auburn, Indiana at the Auburn-Cord Museum. I had been there before, years ago, and certainly remember the incredible cars produced in that era. As my mother said to me once, “When I was 17 and first saw “Gone With the Wind” all I remembered were the gowns and balls, when I was 40 all I remembered were the wounded.” Sort of the same with me at the museum, the first time all I remembered were the cars, this time I read all the history of the people and the tremendous negative changes brought about by the Great Depression. I started to get some real bad vibes when looking at the production numbers falling 43% year over year and realizing how very familiar they sounded. You walk by the Auburn speedster, and it is virtually impossible not to get a chill at the stark beauty of the vehicle, and the incredible advancement from the vehicles just a few years previous. It would take a rare person to not want the keys to drop down and the door to open for a little spin. It is almost tragic when you read the production numbers going form approximately 28,000 in 1931 to 4,800 in 1932, closing for good in 1932. I believe the Cord made it to 1937, the Cord notable for its modernistic beauty, front wheel drive, and 100+ mph speed. The Duesenberg made it to about the same year.

This is not a column about auto history, although I could go on for quite a while about the incredible innovations and appeal of those three brands. The point is that in the early part of the century the progress and innovation was mind-boggling, with 60 car manufacturers active at some point in the State of Indiana itself. Now a lot of these people were, in fact, assemblers, with maybe a unique body style or drive train, because there were a significant number of component manufacturers that would enable you to complete the rest of the vehicle. You could buy the engine from Lycoming, or the transmission from someone else, to go with your new body style. It really was the America we all think existed, with real driven men putting their ideas and capital on the line, and any setback looked at as an opportunity to get it right the next time. Auburn, Indiana was a sleepy farm town of maybe 4,000 people, and all of a sudden they had a plant of 1,500 or so people building some of the finest vehicles made, maybe ever made. Then it was gone, victim of a Depression totally out of the control of anyone involved. The people involved, the incredible forward thinking, the wealth and capital that had been generated, and maybe the long term plans of the people pounding out the cars, all gone in an economic upheaval few truly understand to this day. I really can’t emphasize enough that it was more than an economic downturn, it was really almost the equivalent of the Dark Ages, with tolls on innovation, education, self esteem, you name it. If WWII had not happened no one, not the most brilliant economist there is, could say for certain when or how it would have ended.

The question is, are we going there again, will we have the same type of really dead zone in terms of innovation and social advancement. I don’t think so, and sincerely hope not. We do know that the Fed has not made the same mistake of allowing the money supply to drop 24% or so in six months, and that the rate of decline in the economic numbers appears to be slowing. Clearly we know that the losses of savings of innocent people, which happened when banks closed in the 30’s, is not happening this time (so far), and that the “monetary system” has been refloated in terms of money in the “system.” But that is all we really know for sure right now. We don’t know if in 1930 the Fed had acted strongly and refinanced the system by 12%, say, and only allowed the money supply to drop by half the amount it did whether the Great Depression would have been half as bad, just as bad, or not happen at all. My suspicion is that it would have helped a lot in the overall figures, but maybe not enough to save these auto companies and the manufacturing in Auburn, Indiana, meaning they would still have been in their own private “Depression.”

The current situation has some eerie similarities to the Depression in local areas. In 1973 we had serious production cutbacks in many industries (autos included). Many plants went to one shift from two, etc. but like the market Crash of 1987 we really did not lose as many whole companies. This time, like in 1932, Lehman stock is not coming back. The auto plant in Janesville, Wisconsin, like Auburn, Indiana, is not coming back, ever. The concept of workers in Janesville looking for a job in Tulsa, and getting in the car and heading there in much more reminiscent of 1933 than 1973, where most many were simply eventually called back to the same plant. Right now we are being held up by a huge increase in government spending, so far (just like pushing a car down a slight slope) it has shown little sign of picking up enough momentum on its own for anyone to stop pushing.

I am not trying to be negative, I actually think an awful lot of people have done some very rational things to help the economy. It is just that the further we go the more I come to realize the extent of the ramifications if we do not succeed in turning this economic bus around. We could easily lose a significant part of an innovative decade due to lack of capital, governmental meddling, brilliant people saying it just is not worth the effort to try something different. As far as trading, I plan on staying the course. We are positioned to take advantage of the premium decay in the short term should it continue, and remain protected should the recovery prove short-lived. We also have, in most cases; significant cash to take advantage if a retest on the March low should that opportunity develop. I am also tempted to go long a little corn, for the Ohio corn crop (that I could see) seemed very late and very stressed. More on that later. In the meantime we expect a fairly slow holiday shortened week, but you never know. Happy 4th!