“Sometimes paranoia’s just having all the facts.” – William S. Burroughs

“Facts do not cease to exist because they are ignored.” – Aldous Huxley

“The market can remain irrational longer than you can remain solvent.” John Keynes

After any major market move, it is a good idea to reassess your financial goals based on age, need, and risk tolerance.
Do not be afraid to adjust and re-balance.

Here is an overview of the US market behavior last week and for 2017:

Concerns about Trump’s speech before Congress led to a Tuesday close of 12.92. The VIX ended the week closing down at 4.45% or 0.51. This was the lowest closing low since February 14. The VXST – CBOE Short-term Volatility Index – show the largest decrease, 9.03%, among the various S&P 500 volatility indexes. Fears of March 15 parliamentary elections in the Netherlands and the April 21 beginning of the French Presidential election process were not reflected in pricing of VIX futures or related products. This could change at any moment. The ephemeral nature of fear and VIX pricing guarantee this.

Here is an overview of last week for the VIX and related products: 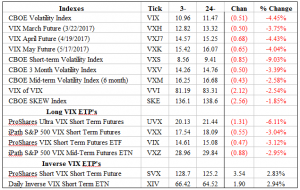 There are just a few economic reports that will be released next week, but they do include one of the biggest – the U.S. Employment Situation report on Friday. Monday starts with Factory Orders followed by the Tuesday release of trade numbers. The focus changes to employment on Wednesday with the release of the ADP Employment Report. Employment remains the focus through Friday when February’s Employment Situation Report is released. The ECB will also release a statement after its regularly scheduled meeting on Thursday. January merchandise trade and industrial output will be released this coming week by a number of countries.

The wild card remains the US political climate. Google Trump and read the tweets from Donald Trump (@realDonaldTrump). His tweets have the capability of setting the tenor for an entire trading day.

The earnings season has entered the quiet time. This was the second straight ho-hum earnings season. It has been my experience that the post earnings behavior of individual stocks and the associated options usually show a remarkable consistency between individual earnings announcements in movement of the underlying and change in the implied volatility of the options. This consistency within individual stocks has not been apparent the past two earnings cycles. It is as if a “new normal” is being defined.

I have added a scan of stocks with earnings announcements to the calendar for each day in the coming week. The scan criteria are: Closing price> $20, Implied Volatility > 25, Average daily option volume > 800 contracts. Liquidity, as determined by width of option markets and individual option contract volume, is a crucial component in successfully trading any option strategy. One of the most frustrating experiences is an inability to adjust or exit a strategy due to lack of liquidity in the market. The market uncertainty associated with the election has impacted liquidity. I found it difficult to enter earning trades last week. The bid/ask spreads seemed much larger than usual. Do not force trades in illiquid markets. Data Source for earnings: OptionVue8 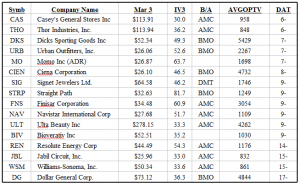 Advice to stimulate your imagination:

“I took a speed-reading course and read War and Peace in twenty minutes. It involves Russia.” – Woody Allen

“Nobody should have any illusion about the possibility of gaining military superiority over Russia. We will never allow this to happen.” – Vladimir Putin

International Economic: Germany Manufacturers’ Orders – 2:00AM, Eurozone GDP – 5:00AM.
Other: