Hal Snarr: The end, when falling unemployment starts to bend and ascend

Recent labor market news is being hailed as the beginning of the recovery that should have been. Commentators on CNBC and the Fox Business Network are glowing over this week’s ADP report. It showed employment surging by nearly 300 thousand over the previous month. It also showed that goods producers were responsible for over a third of those new jobs. The chart below shows initial jobless claims touching a 44-year low, and unemployment dropping to its lowest rate since before the Great Recession.

Celebrating the recent labor market news is like appreciating a Monet painting from two inches away. Both are myopic views that mask the real picture. Backing away from a Monet reveals that the dots of many colors become an increasingly beautiful Victorian scene. Backing up in time from today’s lows in jobless claims and unemployment reveals that recession is around the bend when labor market news cannot get much better.

Mainstream economists embrace such news as the ideal time for the Fed to return the federal funds rate to a more normal level. Doing this heads off the inflation produced from monetary stimulus. The chart below shows how setting rates near zero for eight years and counting has put upward pressure on inflation, which is heading north after touching zero in 2015.

The recent acceleration in inflation coincides with the S&P 500’s post-election burst. After the election triggered a short-lived sell off between October 24th and Election Day, which is highlighted inside the green circle in the chart below, an epic rally followed. This rally could be from traders pricing in Trump’s pro-business policies. However, it could also be a result of bottled up inflation, in the form of the trillions of dollars in excess reserves that the Fed digitized into existence, finally being unleashed on the economy. 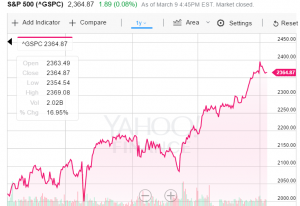 Whether or not excessive monetary expansion is driving the recent stock market rally, if history is correct, the Fed will respond to it and the acceleration in CPI and PCE inflation by hiking the federal funds rate. Just this week the Bloomberg World Interest Rate Probability hit 100%. That implies traders are all but certain that the Fed will hike rates.

To normalize rates, the Fed abandons its bubble inflating policy of keeping interest rates too low for far too long. Austrian Business Cycle Theory says the switch to higher rates and slowed money growth busts easy-credit booms. The 5-year and 10-year TIPS spreads, graphed below, suggest that markets could be pricing in this possibility. The recent flattening out of both graphs is suggesting that expected rate hikes are going to slow aggregate demand in the future.

The graph of excess reserves below shows the expansion may be coming to an end as well. In the aftermath of the 2008 financial crisis, the Fed raises the federal funds rate by setting interest on reserves at a higher rate. When this price floor is increased, banks are more likely to lend to the Fed (in the form of holding more reserves) than to consumers and firms. So perhaps the recent uptick in excess reserves is from banks pricing in recession that rate hikes usher in.

Low jobless claims, low unemployment, and strong job growth are signaling the Fed’s historic monetary party is coming to an end. If The Doors were still touring today, they might be singing: This is the end, my only friend, the end of the Fed’s elaborate plans, the end.