When the U.S. enters a recession, politicians, their appointees, and their media allies begin banging their economic stimulus drums. The pro-business party beats the tax-cut drum, the pro-labor party beats the raise-government-spending drum, and they and the Federal Reserve (Fed) beat the reduce-interest-rate drum. These drums get beat because macroeconomic theory says these “solutions” boost aggregate demand.

Economic stimulus is an easy sell when unemployment is rising and asset prices are collapsing. Cutting taxes, mailing out government checks, and lowering interest rates puts money in the pockets of Americans. More money in the hands of consumers, workers, firms, and government agencies means they buy more goods and services. More goods and services sold means more is produced. More production means more jobs. Since this means more people have more money to spend, the spending cycle repeats itself, over and over.

When the above narrative is explained using elegant Keynesian equations, it is even more convincing. However, analysis from the only graph that John Maynard Keynes put in The General Theory of Employment Interest and Money (1936), the loanable funds market, reveals the folly of economic stimulus.

The loanable funds market is made up of savers and borrowers. Savers supply loanable funds whenever a bond is purchased, money is deposited into savings accounts or banks lend money to consumers and firms. Borrowers like the firm that sells its corporate bonds to investors, the consumer that gets a loan to buy a home or car, the bank that accepts a savings deposit, and the government that auctions securities to finance fiscal stimulus (tax cuts and increased government spending) are demanders of loanable funds. The size of this market, as measured by our national debt, is around $60 trillion. 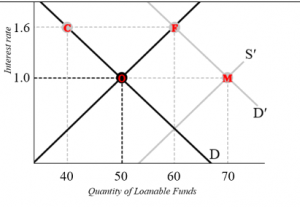 Fiscal stimulus has other consequences, both foreign and domestic. Higher rates in the U.S. induce foreign investors to buy more U.S. securities and shelve profitable projects that they would have otherwise undertaken in their home countries. The dollar appreciates when this happens because foreigners need dollars to buy U.S. securities. This pushes up the prices of U.S. goods, which reduces American exports. Although fiscal stimulus is supposed to push the economy out of recession, it’s intended effects (boosted aggregated demand from greater business, consumer and government spending) are offset by its unintended consequences (higher interest rates, crowding out, and reduced exports). Since wars were and are financed by government bonds, government debt also results in wars that may not have occurred otherwise.

Monetary stimulus has unintended consequences as well, which are explained using the realistic hypothetical above. Suppose the increase in bond demand from the black line labeled D to the gray line labeled Dʹ was instead caused by economic growth. Now, imagine that firms are considering a myriad of profitable projects that cost a total of $20 trillion dollars. If these projects are placed in a risk queue from least risky (at point O) to most risky (at point M), all projects are undertaken—provided the interest rate remains at 1%. Borrowers, however, bid the interest rate up to 1.6% (point F) because there is a $20 trillion shortage of loanable funds at 1%. At the higher interest rate, demand and supply equilibrate at $60 trillion, the riskiest projects are abandoned, and only the least risky projects are financed.

Suppose the Fed had set the interest rate at 1%. To enforce this price ceiling, it must print money to paper over the $20 trillion shortage at 1%. At this artificially low interest rate, all projects in the $20-trillion risk queue are undertaken. Austrian economists refer to the risky projects, which would have been canceled had the Fed not intervened, as malinvestment. Similarly, the consumption that would have otherwise not occurred at 1.6% occurs at 1%. Austrian economists refer to this as over-consumption. It and malinvestment represent an unhealthy competition for resources that are fixed in the short-run. This mal-competition, if you will, inflates asset prices and pushes the economy beyond its short-run capacity.
Everyone enjoys a Fed-induced boom… until it busts. Investors do well following the mantra: “Don’t fight the Fed.” Consumers convert home equity into cash to remodel their homes, buy new cars, or take fabulous Caribbean cruises. However, as inflation expectations begin to creep up, the Fed withdraws monetary stimulus. This causes prices to crest and fall, returns on leveraged assets to turn negative, loan defaults to rise, and the boom to bust.

Economic stimulus follies will continue to damage our economy unless we stop viewing the Fed, the President, and their media allies as some kind of all-knowing oracle. Even if we assume they genuinely want to do good, their actions represent a cage. If we are not released from it, we will become institutionalized like Brooks, the parolee who committed suicide after a 49-year incarceration in Shawshank Prison (Stephen King’s fictional New England prison). Shawshank was unable to take Andy, but it almost got Red.

Do we want to be Brooks, or that neighbor’s dog that has been locked in a backyard kennel for 10 years? If the political oligarchy set us free from their do-goodery, we may sit in our open cages for a few days wondering where the food and water is. This short-run pain will pass when we tire of waiting to be watered and fed. At that moment, when we stick our heads out of our cages of moral hazard, which government has financed with decades of debt, we will take a step toward freedom. The air will be fresher. The grass will be greener. We will get excited again because we will realize that we are finally free to pursue our passions. It will be the start of a long uncertain journey.