“I turn on the TV, open the newspapers, and I see stories of chaos … Chaos,” Donald Trump said with a grimace last week. Trump was speaking at his now infamous press conference last Thursday.

“Yet it is the exact opposite,” he continued. “This administration is running like a fine-tuned machine despite the fact that I can’t get my cabinet approved.”

If the Trump Administration is indeed running like a fine-tuned machine, it’s doing so in defiance of Bruce Tuckman’s timeless principles of team development.

Professor Tuckman, a research psychologist who specialized in group dynamics, identified a model for the stages of team development that every team experiences. Developed in the 1960’s and still taught in leadership studies today, the stages are universal truth; and they have the extra benefit of rhyming. Work teams, sports teams, volunteer groups, bands … It doesn’t matter. All teams go through these stages:

The forming stage is, as its title suggests, the time when the team is assembled and those involved get to know each other. It’s a time to set objectives. Uncertainty prevails. Most team members tend to go along with the leader, sometimes at the risk of the kind of group think that allowed the Bay of Pigs invasion to proceed early in the Kennedy Administration.

Formal roles might be assigned in the forming stage, but real roles like influence and power are decided in the storming stage. People have different yet legitimate views on how things will get done, limits of each other’s authority, and even the agenda itself not to mention the often unhealthy political activities that are part of assembling a team.

One might look at those two stages and wonder why anyone would want to lead a team if the associated behaviors are inevitable. The norming stage, when cohesiveness develops, and the performing stage, when the team really does become a fine-tuned machine, are the reasons. There are specific leader tactics for moving the team through the first two stages as quickly as possible. It starts with embracing each stage as normal, not cause for concern.

Storming was normal early in the Reagan Administration when the Californians whom the president brought to Washington clashed with the cabinet members from the political establishment as they jockeyed for influence. It was normal, perhaps a bit beyond normal, when chaos reigned early in the Clinton Administration thanks to infighting between the staffs of the president and the first lady while, as Bob Woodward wrote in his book The Agenda: Inside the Clinton White House, Bill Clinton alternated between rages and dithering. It was normal in the Obama White House as the Rahm Emanuel faction vied with the Valerie Jarrett faction for the president’s ear.

Storming is inevitable in the Trump Administration as well. Does anyone doubt that there is friction between the campaign holdovers and the Republican regulars in the administration? Does Reince Priebus believe he is running the White House like every other Chief of Staff, or does he find Kellyanne Conway and Steve Bannon insinuating themselves into his duties? These are politicians, strong personalities one and all. Of course they are butting heads. Of course they are storming.

It only complicates matters when, as President Trump noted, he can’t get his cabinet approved. As each new team member comes on board, the team reverts to some elements of the forming stage followed by their unique inputs to the storming stage.

I don’t doubt that there are some very good people in the Trump Administration doing very good things on a daily basis; but unless Mr. Trump is the best leader of all time, the administration is months away from being a fine-tuned machine. In fact, the team will never be less productive than it is now. 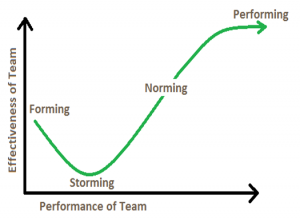 Trump’s challenge is to lead his team through the messy times so it can become what he has described. Ever the presumptuous one, I have a few suggestions for him.

One more suggestion … Stop saying your administration is a fine-tuned machine. It isn’t possible. It isn’t true.