Hal Snarr: Will the cocktails the policy mixologists keep serving result in the nastiest economic hangover ever?

When the economy begins to sink into recession, politicians, economists, policy wonks, and bureaucrats at the Federal Reserve (the Fed) start serving up cocktails of fiscal and monetary stimulus. Although history has shown that the cocktails that these mixologists concoct ultimately gives us a nasty economic hangover, it seems that they have not learned this lesson.

The graph below shows how inflationary monetary policy affects the Case-Shiller Home Price Index. In this diagram, quarterly home prices are plotted versus the M2 money stock from just over two years earlier. Since both variables are in log-scale, the red line in this graph implies that after the Fed raises the growth rate of M2 by 1%, the home prices rise by around 0.367%, nine quarters later. Since the average quarter-to-quarter change in the M2 growth rate is about 16% (this was the case between 1995 and 2004), the line it the graph implies that raising M2’s growth rate by 16% per quarter causes the growth in home prices to increase by 6% per quarter. 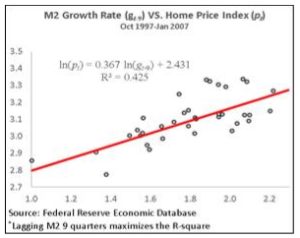 The acceleration in an asset’s price is referred to as an asset bubble. These are popped after the Fed pokes bubbles with restrictive monetary policy. Poking asset bubbles usually pushes the economy into a recession. This seems obvious in the graph below. It shows that prior to every recession since the early 1980s, a rapid rise in the federal funds rate has resulted in a recession a few months later.

The compounding effect of a 23%-quarter-to-quarter increase in the federal funds rate is substantial. For example, suppose the Fed wants to normalize rates after it had set its target at 1% for an extended period to push economic growth back up to 3%. Further, suppose that 4.25% is considered “normal” for the federal funds rate. To raise the fed funds rate from 1% to 4.25%, the Fed has to boost its target by 23% a quarter for eight consecutive quarters. Doing this dampens economic growth by around 10% per quarter. After the dust settles and negative compounding kicks in over eight consecutive quarters, the economic growth slips to 1.43%, two years after it had recovered to 3%.

On the other hand, the right tail of this graph also suggests that the Fed has not learned Lesson 1. The last time it kept interest rates at around 1% for a few years resulted in the longest recession since the Fed was given the keys to the economy. Since 2008, the Fed has kept interest rates at an even lower level for nine years and counting. If Austrian Business Cycle Theory is correct, then the historic monetary stimulus party of the last nine years may trigger the most painful economic hangover ever.